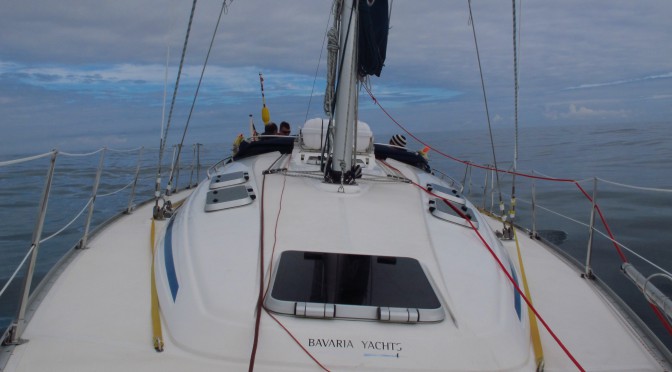 I’d booked this trip with Nomad Sailing to the Scilly Isles over 6 months ago and finally the time had arrived. We planned to sail via Falmouth to break the trip up and to reload the tanks with water and fuel.

In order to catch the tide leaving the Solent via the Needles we sailed to Yarmouth from Gosport on the Sunday evening and had dinner in the Bugle. Salties was shut as they were all visiting a festival!

Joe was our skipper for this long passage and we were up at 0300 and slipped our moorings 30 minutes later. Sails were up pretty quickly and we settled into the watch system. With 5 crew, we’d be working a 2 hours on 3 hours off watch system and each hour someone would rotate off.

The conditions were pretty good other than the wind was coming at us from the direction we wanted to head. We left on a long starboard tack out into the Channel and with the westbound tide. As the tide turned we realised (not immediately) that we couldn’t make any progress into it on the same tack. It looked on the track as if we had changed out minds and were heading over to Cherbourg. We tacked around 1130 and started back up more towards the English coastline across the seemingly endless Lyme Bay. We still weren’t making much over the ground due to the tide so opted to motor sail for a several hours.

Settling in to a watch system

From here we settled back into the watch system and everyone was ensuring they got there rest and slept during their off watches. Once we’d lost sight of the coastline there wasn’t much to see anyway – hardly any traffic at all. The gently rolling English Channel swell took its toll on one of our crew (and skipper who kept quiet about it) as the day progressed.

By around 2030, we were around 15 miles east of Brixham and Dartmouth and we tacked back on to starboard and killed the engine. With one crew out of action we switched to a 1 hour on, 3 hours off watch with one crew on at a time. Help would only be a shout away and with little to no traffic and steady conditions it wasn’t very burdensome. We rounded Start Point well clear of the overfalls and the next waypoint was south of (avoiding the rocks) Eddystone Lighthouse. We had the engines on again by this point as weren’t making enough progress against the tide.

We arrived in Falmouth early in the afternoon on Tuesday after 34 hours on the water and 176 miles. The dock master in the marina was surprised we were onward bound to Scilly given the incoming 40 knot winds they anticipated.

The shower facilities were decent enough and we wandered around Falmouth for an hour after eating superb fish and chips in Rick Stein’s ‘Fish’ restaurant.

After a short rest we were ready for the next push on to the Scilly Isles.

One thought on “Sailing from Yarmouth to Falmouth”