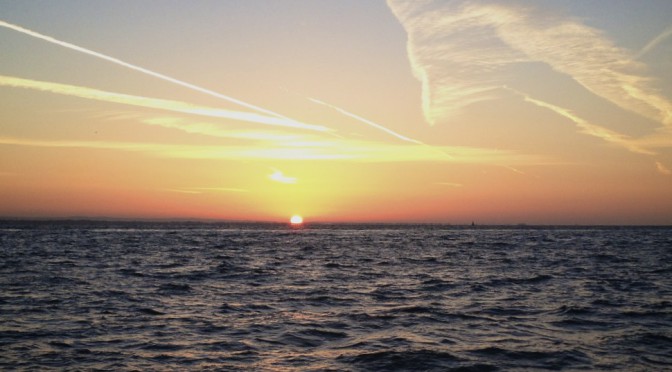 I’ve just returned from skippering my first night crossing across the English Channel. We had spent the day recuperating from our passage over here having had pastries on board in the morning late enough that meant we didn’t really need, or want, lunch. Lou was busy polishing the gelcoat so I made us a substantial chilli timed for about an hour before departure.

I briefed the crew at about 1750 and we got the boat ready to slip shortly after. The passage plan I had prepared would be straightforward from Cherbourg to Gosport. It comprised the following main elements:-

The wind was forecast as variable 4, SE 4 or 5 later, so we left with full sails on a close reach, the wind actually coming from the east. Assuming a boat speed of around 5kts we set a course of 022 which if all went well would take us to Bembridge Ledge about 13 hours later.

We had a couple of hours of decent light before switching on our tricolour, making around 5.5 to 6.5kts in around 12-15kts of breeze. As the wind picked up, we elected to put a reef in before it got completely dark. The helm held us on a close reach while we let the mainsheet right out, tightened the topping lift and sailed her using just the headsail.

Identifying the lighthouses as we made distance from Cherbourg was not as easy as we thought. We were never able to identify the light at Cap de la Hague [Fl.5s] but Pointe de Barfleur [Fl(2).10s] was visible. Using the dipping distances table in the almanac I anticipated it should go from a definite flashing light to a flashing loom at 13.1 miles. It turns out, though, to be quite boring waiting for that to happen, plus I soon had other things on my mind – traffic.

Traffic is both interesting and exciting but also dangerous. By virtue of the fact you can see them means they’re only a few miles away and travelling at 20-25kts means they could be on you in 10 minutes. And waiting a few minutes to take successive bearings eats into that time. Very soon we had several vessels in a line and one of them was on a closing bearing of 345. As we bore away to a broad reach we were in danger or risking a gybe as the helm found it challenging to hold course.

This continued for a few hours including the added apprehension and confusion of a large ferry coming towards us bow on from the starboard beam. It was quite disconcerting trying to work out if we had assessed it right – that he was hanging out in the main west to east shipping lane.

I went off watch at about midnight leaving Lou on deck and did manage to fall asleep quite quickly despite the adrenaline of the last couple of hours. On reflection, I think an AIS unit would help greatly but of course it would mean less practising with a hand bearing compass, and therefore less proficiency perhaps at some time in the future when it’s needed.

I was aware of some tacking during the night and woke about 20 minutes before my watch alarm at around 0330. The crew on watch were concerned the wind had died down so after around 20 minutes of waiting to see for myself, we shook the reef out and boat speed picked up again to around 6.5kts. I noted that the log entry for 0240 was missing so plotted our position and worked out a new course of 016.

Watching the sun come up on a clear night is pretty special out there and at around this time I set a waypoint into the chart plotter for the ECM and it was quite obvious from the difference in COG and BTW that we did indeed have the last hour of tide working us east to west at 3kts.

We sailed into the Solent with the wind mostly behind us and switched the engine on at around 8am as we came to the main channel No.4 buoy. We entered Portsmouth harbour at 0845 – around 14 hours after leaving.