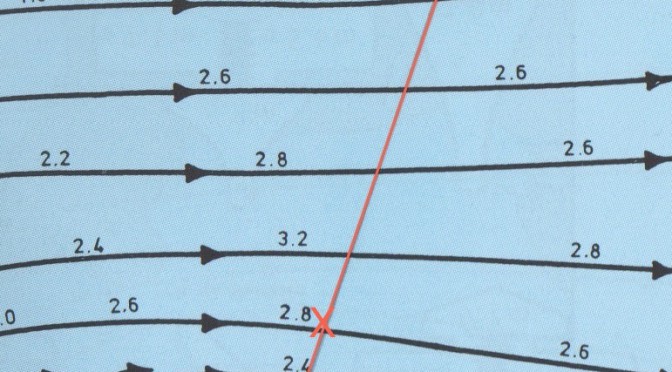 This article is part 2 of a series on what’s involved when navigating across the English Channel and covers estimating the effect of tide during the crossing.

In the previous article, we looked at the factors involved in determining our departure time. The next step is to work out the net tidal vector during our 13 hours crossing.

Determining the effect of tide

It might seem intuitive to sail first to a waypoint midpoint across the channel (netting out one direction of tide) and then another to the destination, but in fact this results in a longer ground track. The uninitiated might even work out several courses to steer but this leads to a very inefficient course.

The answer is to plot a single course to steer for the entire crossing rather than involving mid-Channel waypoints. Suffice to say, it will be a far quicker crossing if you take this established approach. Your ground track will swing you east or west with the tide and then back again. The question is by how much.

In order to work this out, you will need to consult a Channel tidal stream atlas in order to determine each hourly, and therefore a net total, tidal drift anticipated.

Sources of tidal stream data in the English Channel

There are two widely used sources for this:-

The first third of Reeve-Fowkes is a superbly written text on how to use the tides to your advantage as a yachtsman;  the remainder is the atlas itself. The real advantages to this atlas (over the Admiralty one) are built in tables avoiding the necessity to use the tedious Computation of Rates graph to account for springs/neaps, easier interpretation of the tide between measured locations together with the fact that everything is referenced to HW Cherbourg. During the summer, Cherbourg tidal tables are the same as British Summer Time so you can just leave your ship time alone for your trip.

Having made a note of time and height of high water Cherbourg from your Almanac – we’ll use 5.5m at 0840.

The process for estimating the net tidal vector

On my recent crossing to Cherbourg, for example, I expected

Having estimated your net tidal vector it’s now time to work out the course to steer.

2 thoughts on “Navigating across the English Channel – Estimating Net Tide”